After the delights of Pieces of Hate, Deep Sea Fishing and Clue Scroll Overhaul, April has something of a breather before the big-hitting month of May, when you get the double-punch of Solak and an as-yet-unannounced quest!

April’s updates are significant, however – changing up how you train. There’s the Return of Line Firemaking (we missed you!), Safecracking, Rebuilding Edgeville, a toolbelt improvement and additions, Spring Fayre, a Tribal Trials task card, Combat Academy improvement and more.

The Return of Line Firemaking:

Let’s start with something iconic to RuneScape that has fizzled out in recent years: Line Firemaking. If you’re like me, you reminisce about long lines of flames, stretching across Varrock. Well, this month, we relight that fire!

At level 70 Firemaking, you will gain the ability to light fires quicker, but the biggest change happens after Firemaker’s Curse. We’ve turned Char’s weekly minigame into a repeatable training method, with the chance of dropping a pitch can. This item speeds up bonfires, but – more importantly – it dramatically speeds up line firemaking, making the high-XP, high-intensity training method viable again.

The pitch can is tradable, so we expect avid firemakers to make a tasty return if they get their hands on one. Let’s make a few skillers rich!

It’s not only Firemaking that gets some love. As announced at Runefest, Thieving gets a spot of Safecracking.

It seems the Thieves’ Guild have upped their game, and are looking at bigger marks than level 1 men and women: they’re looking greedily at the Kings, Queens and bigwigs of RuneScape. Head to various castles or keeps around the world, and begin looting their safes to fill your lootbag. 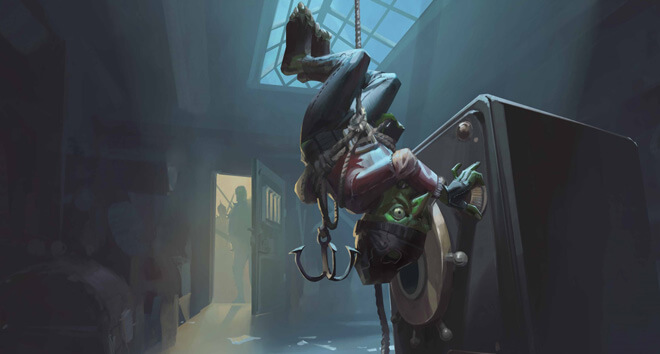 This is a new training method, unlocked after completing the Buyers and Cellars quest and related capers. the safes you’ll get Thieving XP, cold hard cash and reward points. These points can be spent on gubbins like a reward that protects you being stunned, and an item that allows thieving elf clans that are suspicious of you.

Safecracking is a simple, slightly AFK training method that is best described as elder trees for Thieving.

This month, we tackle a very different kind of Unfinished Business: a town that has been left devastated for far too long. After Ritual of the Mahjarrat, Edgeville took a battering (spoilers!), and this month we give you the opportunity to return it to a former glory.

Talk to Mandrith in Edgeville and he will get you clearing rivers, fixing buildings and sweeping up the odd dead body. Get Farming, Construction, Magic, Prayer and Mining XP for your efforts, gain a dragonkin lamp, and unlock the chance of owning Effy, a floating ancient effigy pet, whenever you open dragonkin lamps and claim the final XP.

The Ninja and Growth teams have been on overdrive this month, producing improvements that have real impact.

First, the toolbelt gets a makeover, bringing all of your unlocks onto a single, manageable screen, and making it easier for us to add items in the future. And lo, it comes with the new addition of a grappling hook. 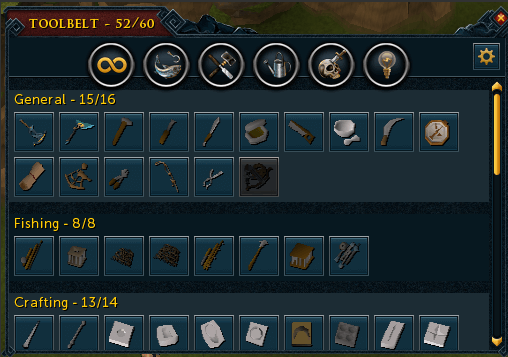 The Combat Academy has been brought bang up to date, and now teaches Revolution rather than the more advanced Manual combat mode. It should get more new players understanding the combat system, which can only be a good thing.

We’re bringing you the next Ninja poll, with several potential fixes, alongside something we want to do regularly: a survey that lists all of the new update ideas on our backlog, so we can get your opinion on whether they are worth doing. This will be a little window into our creative world, and will also include ideas that have been inspired by you.

I have a soft spot for the task card events, and April brings a cheeky ‘Tiki’ one in the form of Tribal Trials. Complete shamanistic challenges and unlock Howie, the rather wonderful tribal pet. 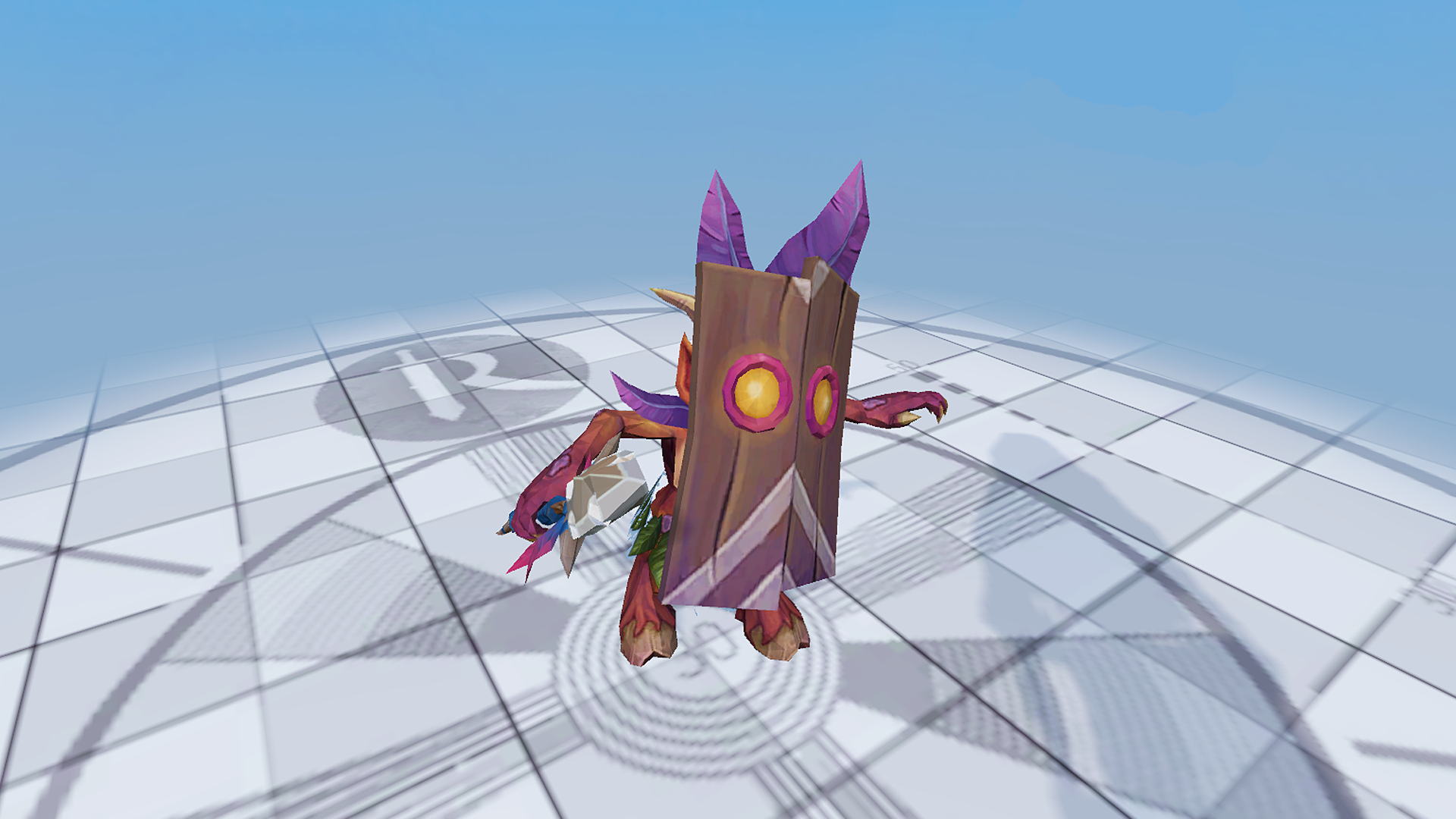 And let’s not forget that Tribute to Guthix and the Spring Fayre continue to run through the month. If you’ve visited the Fayre, you’ll know that it has been rebalanced and no longer requires any entry tokens to enjoy its quite wonderful activities. Anyone for a spot of Hook-a-duck?

All that remains is to keep an eye out for a surprise or two this month. April has a habit of making fools of us all.

Have a wonderful month, fill the world with glorious fire lines, and we’ll see you next month for a spot of Solak. Goodbye!

Let’s start the month with a splash, shall we?

Join the whole community and reel in the Fishing XP at our new offshore hub, available at Fishing level 68. Work in teams and train alongside players at every level, or go it alone; whatever your skilling style, we can assure you that a best-in-game experience awaits.

No time to get complaicent! there are players, there’s activity, and the new hub attracts everything pelicans and travelling merchants to whirlpools and leviathans, which you can interact with for extra rewards. Some will be just for you, but others will require some teamwork. Who knows—perhaps you’ll get lucky and catch a glimpse of the legendary sailfish, Arkaneo?

Plenty of fish in the sea

Stackable magnetic minnows (level 68)
Jellyfish that heal without reducing adrenaline (levels 68 and 91)
The best fish for healing in all of Gielinor: Sailfish (level 97), which you can boil into Sailfish Soup

You can catch a whole variety of fish using the new large net set up towards the hub’s south end Fishing level 68. Plus, some of our existing catches now take bait—including sea turtles, manta rays, and great white sharks. All you need to do is match the catch with the right bait, which you can make by cutting up magnetic minnows.

Don’t Get in a Frenzy

Our new mechanic, Fishing Frenzy (level 94), will have you Fishing like never before. It’s a fun, hands-on method you can expect to make some of your most memorable Fishing gains. But don’t take our word for it—head on over and give it a go!

Gold member? Enhance your training by heading to the Premier Club Vault portal outside the Grand Exchange to claim a bottled boost of your choice the Guardian of the Vault!

Just chat to Goomah at the Fishing Guild, north of Ardougne. He’ll point you in the right direction.

Alternatively, why not dive into our new Deep Sea Fishing-themed world (W116)?

The King and Queen of Spades

Did you know that the Queen of Spades is considered an indicator of intelligence in cartomancy?

Shoot the moon this March with our new outfits—the King and Queen of Spades—and take your fashionscape to the next level. Available only at Solomon’s General Store!

We want to get better at knowing what you think of our content and updates. Because of this, we’re introducing Feedback Buttons: a new in-game tool that allows you to rate your current game session.

You can access the new system via the top-right minimap logout button, or by pressing the ESC key. Try it out!

On that note, we’ve also polished up the options menu. You can read up on those changes!

Curious about what else is happening in March? Check out the Month Ahead!

Join our JMods on the sofas for a Q&A about the projects coming in March, including Unspeakable Horrors, Pieces of Hate, Deep-Sea Fishing and the Spring Fayre. Watch live on Twitch and YouTube – be sure not to miss it!

LootScape will be enabled, and the item for March – an additional Clue Scroll based on your level – will be a guaranteed drop.

Join our resident PvM expert with another mass this Sunday!

LootScape will be enabled, and the item for March – an additional Clue Scroll based on your level – will be a guaranteed drop.

The Pink Skirt Events team is comprised of Pmods hosting community events on a weekly basis. Here’s what’s on the agenda for this week: